It has been quite some time since I last updated this blog. I enlisted into National Service one month ago and the last stock I bought before I enlist was Koufu. There wasn’t time for me to write my thoughts about this purchase. Since it is the long National Day holiday, I might as well write a short article about it. 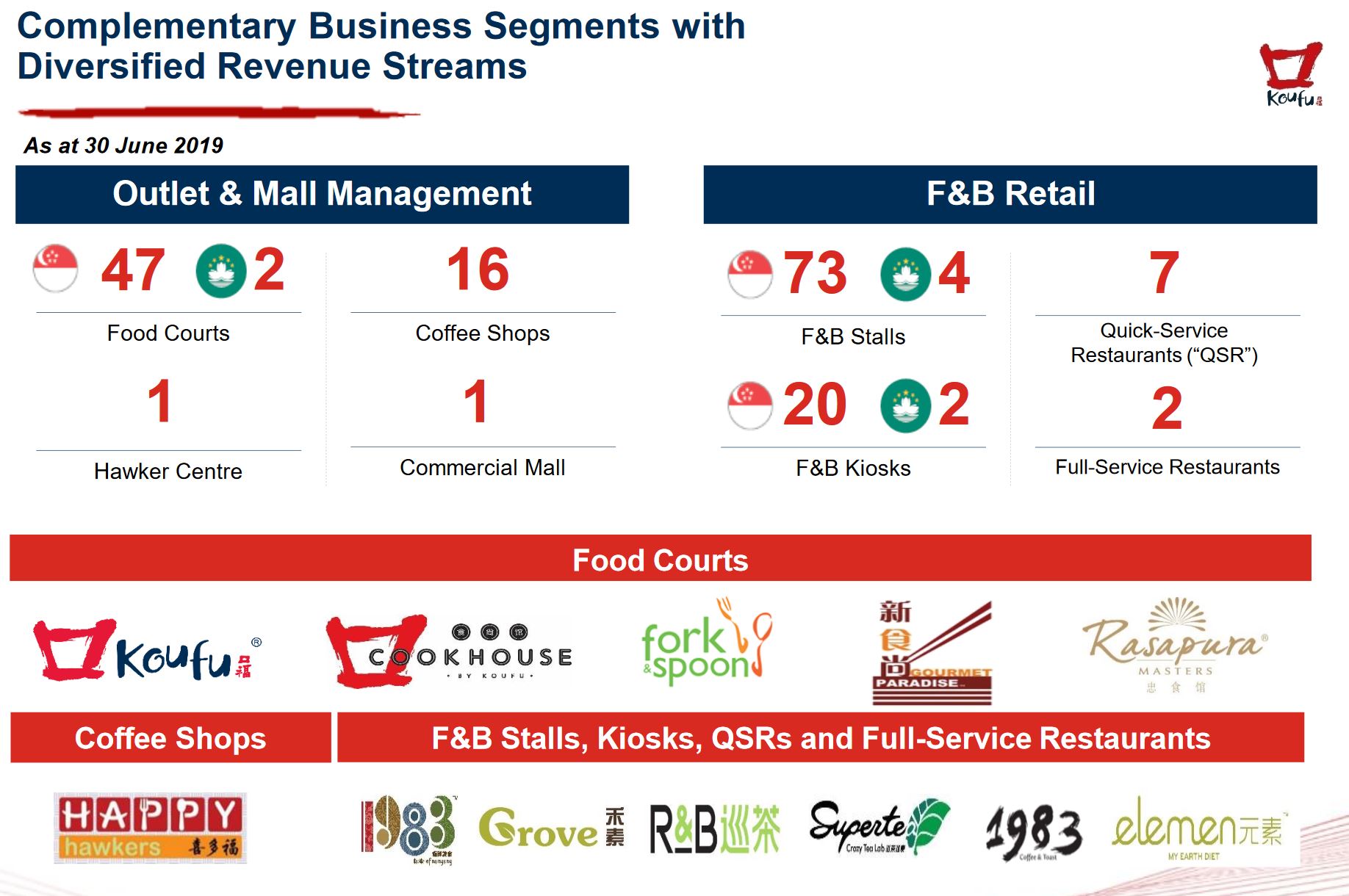 Koufu operates and manages 64 food outlets under the brand names of “Koufu”, “Koufu Cookhouse”, “Fork & Spoon”, “Gourmet Paradise”, “Rasapura Masters” and “Happy Hawkers”. It also operates F&B stalls located within its food courts and coffee shops or within third party food courts as well as F&B kiosks, quick-service restaurants and full-service restaurants. The purpose of Koufu introducing different brand names at different price points is to target different group of consumers who have different tastebuds, preferences, occasions. Koufu’s multi brand strategy has allowed itself to target different market segments at different price points. This resulted in growth in customer base and market share. 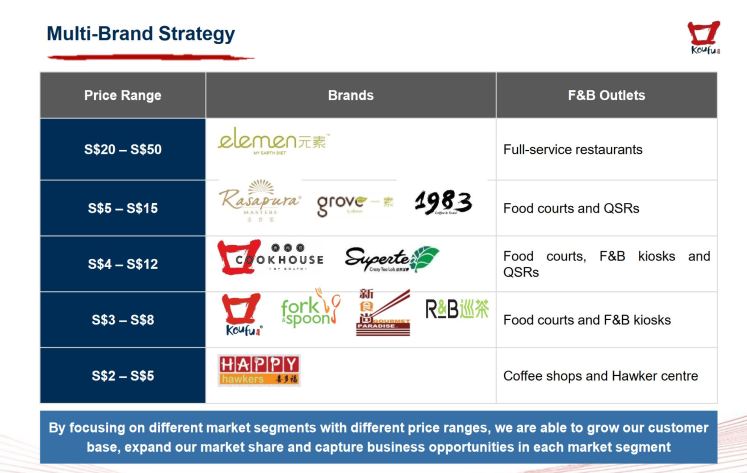 According to an initiation report by DBS, for its Outlet & Mall Management segment, Koufu uses different revenue model for its foodcourts and coffee shops. Revenue model for coffee shops is straightforward where Koufu will receive fixed monthly rental fee and general miscellaneous charges. On the other hand, revenue model for its foodcourt will be either monthly fixed rent or variable rent pegged to the stall’s gross turnover, whichever is higher. With this model, Koufu can grow its revenue organically so long there are more customers who are willing to spend more at their foodcourt. Even if sales performance for a particular stall isn’t good, revenue will not be significantly impacted unless stall owners leave their stall for other operators.

The business’ Koufu is operating is defensive as it is a necessity spending regardless of economic cycle. Koufu will benefit from the impending economic downturn because the food from its food courts and coffee shops are priced cheaply and competitively.

As we are expecting a downturn, I started looking for Singapore defensive stocks and a few stocks I can think of will be Sheng Siong, ComfortDelGro, SBS Transit, Koufu and the telecommunication stocks such as Netlink Trust and Singtel. All stocks mentioned are providing services that are necessary in this day and age. Regardless of economic cycle, everyone still needs to buy groceries or basic necessities at Sheng Siong. They can either walk or take public transport (SBS Transit, ComfortDelGro) to the store. Even if they do not cook, people will go down to the nearest coffee shop or food court (Koufu) to settle their meal. People prefer to settle for a cheap meal during recession because their purchasing power might not allow them to afford eating at restaurants (Jumbo Restaurant, BreadTalk’s Din Tai Fung). How about telecommunication stocks such as Singtel, StarHub or even Netlink Trust? In this digital age, phones and internet have become a necessity for survival. It’s impossible for us to terminate a contract with the Telcos just because we can’t afford to continue the service.

We shall look at the financial performance for the past few years. 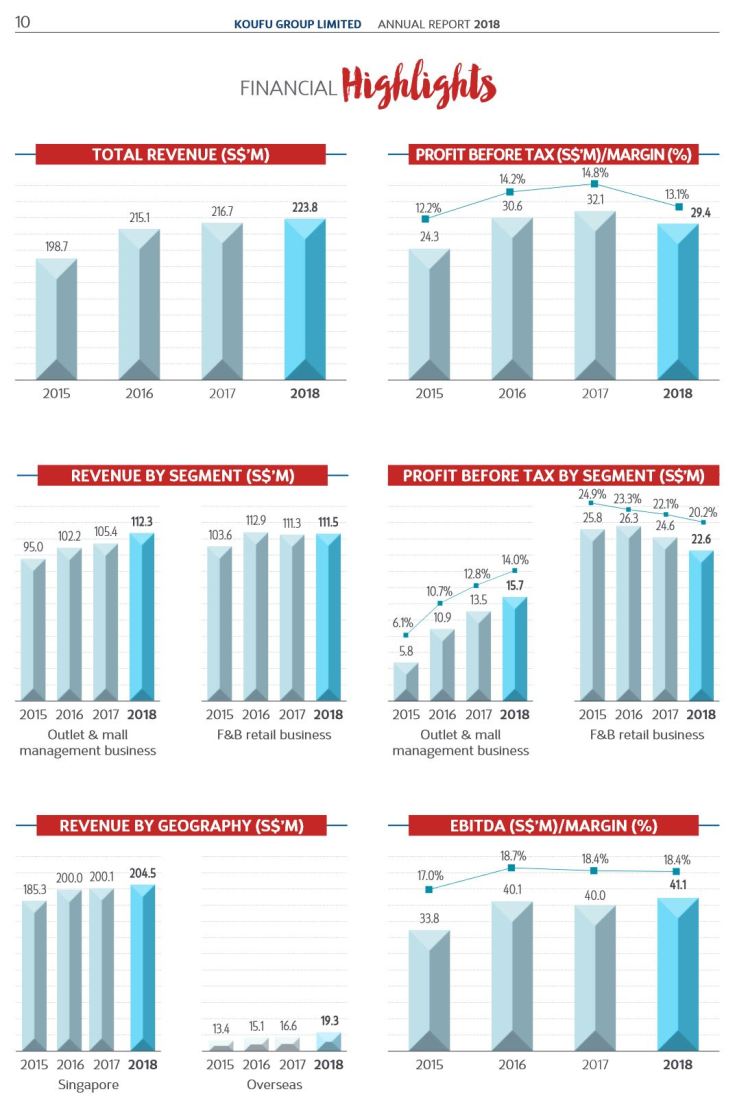 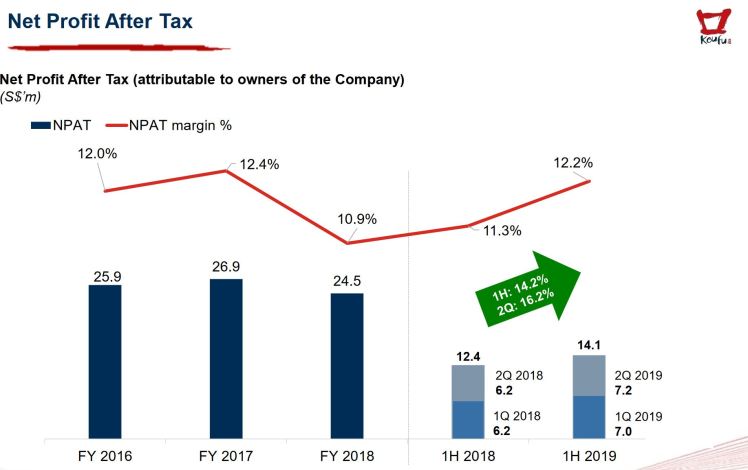 Both segments are still growing though F&B retail segment is growing at a much slower pace. For its latest financial results reporting, Outlet & Mall Management grew 11.3% to $29.5 million from $26.5 from a year ago. Koufu attributes the growth in revenue to opening 1 new foodcourt in Macau and 1 coffee shop in Singapore. Marina Bay Sands foodcourt started contributing to the group’s revenue after closing for renovation. To add on, most of its existing foodcourts and coffee shops also achieve same store sales growth for the last quarter. F&B Retail also grew but at a slower pace at 3.6% to $28.6 million from $27.6 million a year ago. Koufu attributed the growth to increase in number of outlets. 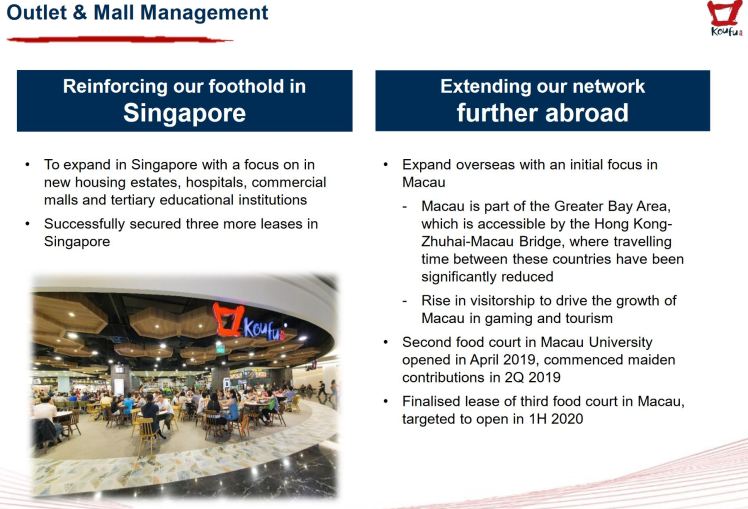 For Koufu to continue growing its Outlet & Mall Management segment, it has to continue to source for new locations to open new outlets in Singapore or expand its overseas presence in Macau or in different countries and cities. The rationale of first overseas expansion in Macau is that Macau has become more accessible to tourists with the opening of Hong Kong – Zuhai – Macau Bridge. This will also result in the growth in gaming and tourism industry in Macau. Koufu will therefore indirectly benefit from the opening of the bridge. Koufu might expand its business into countries such as China, Malaysia, Indonesia and Australia in the future.

Koufu is determined to expand its business in Singapore by opening more outlets in upcoming housing estates, hospitals (where it has already opened one at Sengkang Community Hospital), tertiary educational institutions. I believe that opening new outlets at tertiary educational institution is a sensible strategy as this will enable Koufu to build brand equity among youth. With this strong bond, Koufu hopes that youth will settle their meal more often at Koufu. This will lead to higher rental revenue as the revenue model is either monthly fixed rent or variable rent which is pegged to the stall’s gross turnover, whichever is higher.

Looking ahead, Koufu has secured three more locations to open its coffee shops and food courts in Singapore while Koufu is preparing to open its third outlets in Macau. 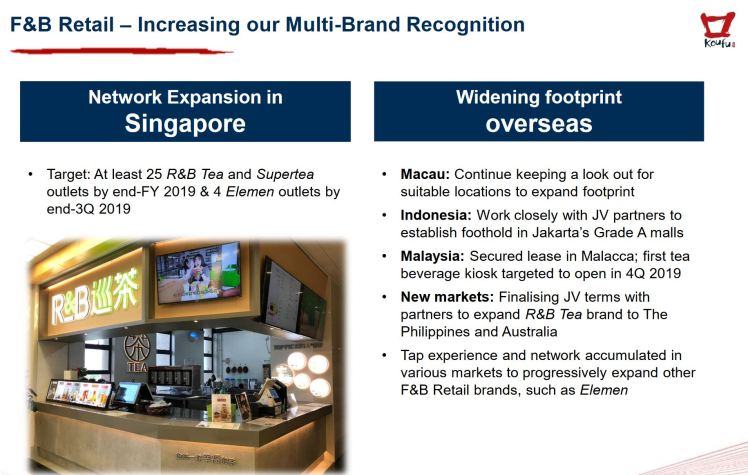 Koufu has extensive overseas expansion plans. Koufu is looking out for locations to expand its F&B brands in Macau. Recently, Koufu enters into joint venture to expand its R&B Tea and SuperTea brands into Indonesia. The first R&B outlet in Jakatra Grade A mall will be opened in 3Q2019. According to Koufu, the tea beverage culture in Indonesia is gaining traction over the years. As R&B Tea targets the younger generation, expanding into Indonesia presents an attractive and sizeable market for Koufu as there are more than 100 million in the targeted age group. Therefore, Koufu  expects the joint venture to contribute meaningfully to its financial performance.

In the long run, Koufu is planning to expand into new market such as Malacca where the first F&B stall will be opened in the 4Q2019. In addition, Koufu is also in the midst of finalising details with JV’s partners to expand R&B Tea into new markets such as The Philippines and Australia.

Koufu’s latest integrated facility is under construction. It will have an estimated gross floor area of 20,000 square metre which is estimated to be completed by next year. The integrated facility is just a step forward to expand the group. The new central kitchen will allow Koufu to better support and cater to future business expansion needs, to enhance its productivity and operational efficiency in producing larger food quantities while maintaining high standards of food quality and consistency. In addition, Koufu intends to collaborate with potential joint-venture partners, to leverage on their expertise and potentially grow its business to include the supply of food products to third parties, and to ride on the increasing popularity and trend of food delivery services to further diversify our revenue stream. The central kitchen can also be leased out to F&B establishments to minimise their food-preparation areas at their existing outlets and stalls, to achieve a win-win situation, maximising resources and cutting costs. This will result in cost savings and provide economies of scale.

This portion does not require any extensive explanation as its presentation slide says it all. Koufu business is strong in generating cash and it has a strong operating cash flow. As a result, cash and cash equivalent increased by $26 million to reach a new high of $93 million. Net cash also rose to $88.3 million as Koufu has minimal borrowings as shown below. With this cash hoard, Koufu is able to fund its future growth inorganically through acquisitions.

Koufu has been on my watchlist for long because of its defensive business. Similar to Sheng Siong, where we experience Sheng Siong continues to grow by opening new outlets in Singapore to boost its topline and bottomline. I believe Koufu’s growth will continue for a few years and looking forward to add more at appropriate times.

Besides Koufu, I am looking to add Netlink Trust in the coming months for its resilient business and high dividend yield in this current low interest environment. Going forward, due to unpredictable market conditions, I will be extra cautious in deploying capital into stocks.

Thanks for reading and till next time.

8 thoughts on “Reasons why I bought Koufu”