This is another installment of REITs analysis where I analyse the REITs that I have in my watchlist. This is the second time I have analysed CapitaMall Trust (CMT) and Frasers Centrepoint Trust (FCT). You may refer to the previous article over here. In my previous analysis on these two, I favoured CMT due to its diversified portfolio than FCT. In 2019 when I wrote the analysis, 76% of FCT’s bigger malls contributed 76% of its property income. More than 1 year has passed, FCT has done some acquisition – Acquisition of 40% of Waterway Point and invested in PGIM Real Estate Retail Fund. In this analysis, we will completely ignore the merger between CapitaMall Trust and CapitaCommercial Trust and just focus on the retail aspect of the REITs.

There is no doubt that the management of CMT and FCT have excellent track record of increasing its DPU per unit every year as shown. However, is CMT still a better buy than FCT?

CMT manages and owns 15 shopping malls around Singapore. 51.2% of its Gross Revenue is contributed by Suburban Malls which include Tampines Mall, Junction 8, IMM Building, JCube, Lot One Shoppers’ Mall, Bukit Panjang Plaza, Bedok Mall and Westgate. On the other hand, FCT manages and owns 12 shopping malls around Singapore. Among the 12, 5 belongs to PGIM ARF Retail Fund where it has close to 25% interest. It also acquired 40% of stake in Waterway Point last year. All of its malls are Suburban Malls. 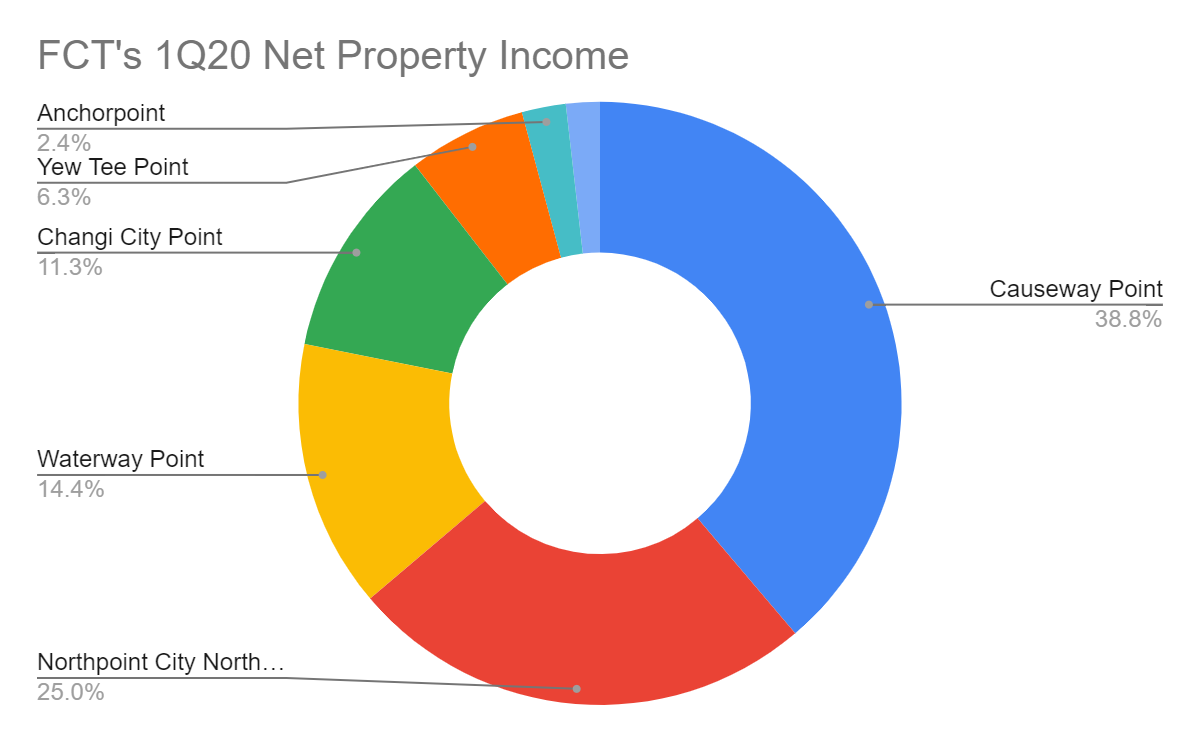 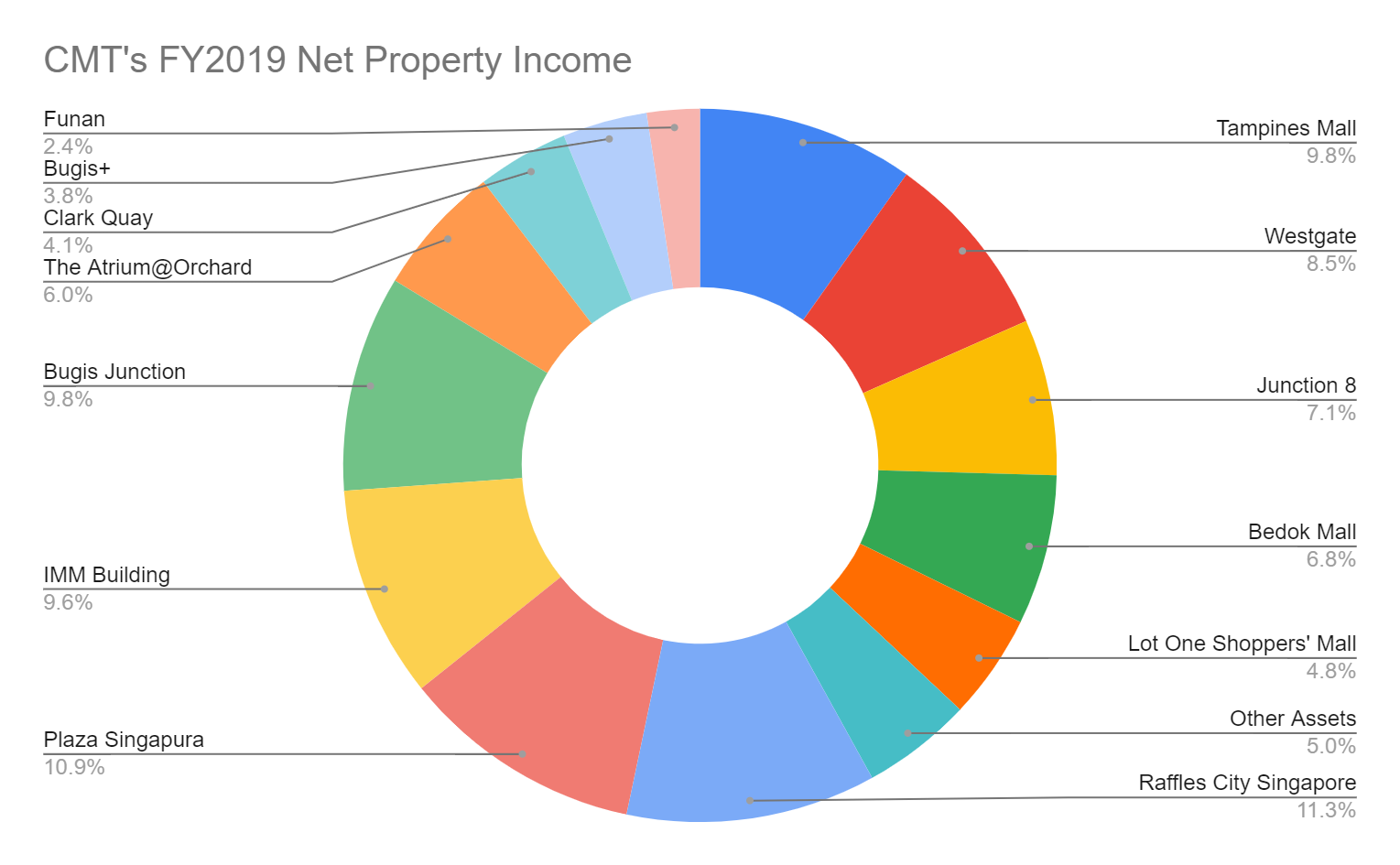 One thing to take note of FCT is that close to 90% of the rental comes from Causeway Point, Northpoint City North Wing, Waterway Point and Changi City Point. That is a huge risk to take on if bigger malls did not perform well as it will significantly drag down the NPI contributions. CMT has a more diversified portfolio compared to FCT. You can see from the image I share how each asset contributes almost equally to the net property income.

WALE for CMT has improved from 1.9 years one year ago to 2.1 years. However, WALE for FCT stands at 1.63 years from 1.72 years a year ago. WALE comparison for both REITS are based on Gross Rental Income. Generally, retail REITS have low WALE compared to say for example industrial REITS. In this case, in the view of the coronavirus, it will be better to have slightly higher WALE. There are 26.6% of leases that will expire for FCT in 2020 compared to CMT’s 21.3%. In the next two years, 53.4% of leases will expire for FCT compared to CMT’s 49.3%. Even though FCT has higher lease expiry compared to CMT, I do not find it worrying as all malls are located in suburban areas where it focuses on necessity, convenience shopping and services to sustain footfall and tenants’ sale.

In general, FCT’s balance sheet beats CMT’s hands down. Compared to a year ago statistics, FCT gearing ratio has inched up slightly from 28.6% to the current 33.2% due to the acquisitions done last year. CMT’s gearing ratio currently stands at 32.9% which was aided by the upward valuation of its properties. FCT’s Interest coverage of 5.93x is higher than CMT’s 4.7x. Despite the fact that CMT has an issuer rating of A2, its average cost of debt stands at 3.2% which is higher than FCT’s 2.57%.

As shown on the screenshot, FCT has a shorter debt maturity of 2.5 years compared to 5 years in CMT. FCT has 57% of its debt maturing in the next three years as compared to just 26% for CMT. I think having a shorter debt maturity is a double edged sword in this current interest rate environment and economic outlook. Interest rate environment is very low now so FCT can refinance its low at a much lower rate than what it has currently. However, in view of the gloom economic outlook, FCT might not be able to refinance most of its debt maturing in the next few years if Global Financial Crisis history repeats. A thing to take note is that only 53% of its debts are fixed or hedge with interest rate swaps. In this zero interest rate environment, it will be wise to select REITs that have lower percentages of debts on fixed rates.

Just days ago, Moody announced that it has downgraded FCT’s issuer rating from Baa1 to Baa2 with outlook downgraded to negative from stable.

In summary, Moody downgraded FCT’s issuer rating due to the coronavirus outbreak as the retail sector is one of the sectors that is significantly affected by the shock given its sensitivity to consumer demand and sentiment.

In order to maintain the occupancy rates, FCT has to offer rental rental rebates and might record negative rental reversions. This results in EBITDA/Net Debt to be higher compared to pre-coronavirus situation. Therefore, FCT’s credit metrics remain weak even after the downgrade.

The rapid and widening spread of the coronavirus outbreak, deteriorating global economic outlook, falling oil prices, and asset price declines are creating a severe and extensive credit shock across many sectors, regions and markets. The combined credit effects of these developments are unprecedented. The retail sector has been one of the sectors most significantly affected by the shock given its sensitivity to consumer demand and sentiment.

More specifically, FCT’s credit metrics remain weak for its Baa2 rating which has left it vulnerable to shifts in market sentiment in these unprecedented operating conditions, and the trust remains exposed to the outbreak continuing to spread.

“The downgrade to Baa2 reflects our view that FCT’s credit metrics are unlikely to recover to levels appropriate for a higher rating over the next 12-18 months,” says Sweta Patodia, a Moody’s Analyst.

Pre-coronavirus, Moody’s expected FCT’s EBITDA to be around SGD170 million for the fiscal year ending September 2020, and its leverage, as measured by net/EBITDA, to be below 7.5x by September 2020.

“The current economic environment may require FCT to offer rental rebates and negative rental reversions in order to ensure continued occupancy at its retail malls,” adds Patodia, who is also Moody’s Lead Analyst for FCT.

As a result, Moody’s base case now assumes that FCT will generate around SGD150 million of EBITDA in fiscal 2020, which in turn will result in net debt/EBITDA of around 8.3x.

While Moody’s expects FCT’s net debt/EBITDA to recover to around 8.0x by fiscal 2021, the rating will have limited capacity to withstand any further deterioration in operating performance or increase in borrowings.

“The negative outlook reflects our expectation that a prolonged outbreak of the virus will delay the recovery in FCT’s credit metrics“, adds Patodia.

FCT’s Baa2 issuer rating reflects the trust’s stable income stream from good-quality, well-located suburban retail malls in Singapore, which have resilient operating track records. But the trust’s scale is small compared to its similarly rated peers, and it faces concentration risk from its largest asset, Causeway Point, which constrain its rating.

FCT has weak liquidity. At 31 December 2019, FCT had cash and cash equivalents of SGD13.2 million against SGD188 million of debt maturities over the next 12 months. The trust expects to refinance its imminent note maturities by drawing down on its SGD310 million of revolving credit facilities, although Moody’s notes that these are uncommitted and short term in nature.

In terms of environmental, social and governance (ESG) risks, FCT’s rating also considers the significant related-party transactions between the trust and its sponsor, Frasers Property Limited. However, this risk is mitigated by the regulatory oversight provided by the Monetary Authority of Singapore and exercised through the board, which mainly consists of independent directors.

Moody’s regards the coronavirus outbreak as a social risk under its ESG framework, given the substantial implications for public health and safety. Today’s action reflects the impact on FCT of the breadth and severity of the shock, and the broad deterioration in credit quality it has triggered.

Given the negative outlook, a rating upgrade is unlikely. Moody’s would revise the outlook to stable if FCT’s improves its financial profile, such that its adjusted net debt/EBITDA falls below 8.5x on a sustained basis.

Moody’s could further downgrade FCT’s rating if: (1) the operating environment further deteriorates, leading to higher vacancy levels and a decline in the trust’s operating cash flow; (2) the trust’s financial metrics significantly weaken, such that its adjusted net debt/EBITDA rises above 8.5x and/or EBITDA interest cover falls below 3x; (3) the trust fails to meet the 45% gearing ratio stipulated by the Monetary Authority of Singapore; or (4) its proportion of secured debt increases such that it makes up the majority of its total outstanding debt.

After analysing for the second time, I still like CMT’s portfolio though I must admit that FCT’s portfolio metrics have improved since the last time I analysed in 2018. In view of the coronavirus outbreak where the retail industry will be affected, it will be better to invest in FCT as all malls are situated in suburban area where many people will still visit the malls for essential needs such as buying groceries or having meals at food court. Concentration risk for FCT still exists where its bigger malls contribute close to 90% of its Net Property Income.

For my own REIT investing, I have a preference in investing in Industrial and Retail REITs. I avoid Commercial and Hospitality REITs as they are cyclical in nature. Therefore, in view of the current situation, I will stay out of retail REITs until the industry has improved. If I have to choose between CMT and FCT, I will prefer FCT for its full exposure to suburban malls which are more resilient than downtown malls.

I hope that you like today’s article. To receive instant notification of any new posts by Mail, you may like to follow my blog which can be found at the bottom of the page.